When I was in college, I looked forward to the annual celebration of youth and the silliness of American Culture known to us at WKU as The Rock Show.  Set near Halloween, this concert/dance party featured costumes, body paint, and eccentric behavior.  A group of man-boys would come together as a band and create a set list to inspire every type of dancer.  This involved such favorites as Bon Jovi and AC/DC.  Their outfits were usually the most intense - with the wearer embracing their character most seriously.  Usually these costumes were ultra tough (or tuff, if you will) and tried to get at the heart of Rock'n Roll personified.  As seen below, Dusty Wood was so tuff, he can't even afford to look straight at the camera.  Who said that modern America is void of Warriors?  Seems to me, they are alive and take'n names. 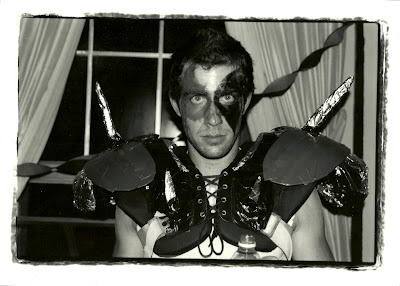 joanna
Louisville, Kentucky
I am just a meandering twenty-something trying to figure it all out. I find solace in capturing the beauty of God's creation - in trying to see life, not just look at it.